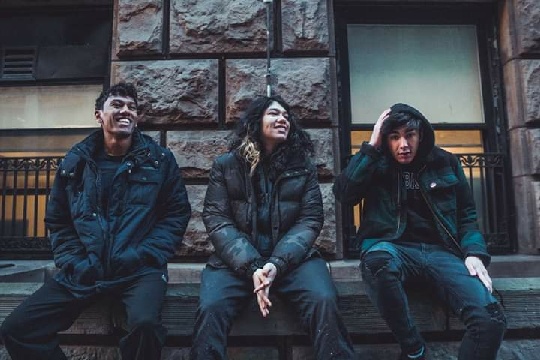 Out Of It is New York City alternative rock band consisting of Manny Quiroga (Vocals), Anel Radoncic (Rhythm guitar/backing vocals) and Leon Naraine (Lead guitar). Formed in March 2018, the band released their debut single/music video “Bandages” in May 2018 on the bands official YouTube channel. Out Of It has continued dropping singles in the following months, releasing three more music videos and their most recent single “Halo” on March 10th.
Manny and Anel met in high school, learning and writing songs together along with other members under the name Minus The Love. After publishing a Facebook post seeking other members, Manny found Leon, who would join as a drummer. They continued to play shows as Minus The Love up until 2018 when they disbanded and formed as Out Of It. Taking into account each of the band members wide musical interests, as well as their native home of Flushing, Queens, Out Of It is a band that looks to incorporate multiple genres and sounds into their songs, while still making them catchy and relate-able. Upon meeting, all members bonded over the shared love of pop punk music such as Blink 182, Taking Back Sunday, The Wonder Years, Green Day ect. While still maintaining their punk rock roots, the band draws influence from classic rock, blues, pop, heavy metal, metal core, ska, old school and new school rap and hip hop, and Latin music. Their lyrics tackle problems such as self-identity, relationships, mental health, perseverance and drug abuse. The goal of these songs is to spread a message of self acceptance and confidence to people, to show the youth of today’s generation that we can all relate and understand each other and use the power of our minds to make a place better for everyone, a place ideal of self improvement and growth. Out Of It will continue to drop music in the following months of 2019.